What Jesus Teaches About Dancing and Crying… and Judging 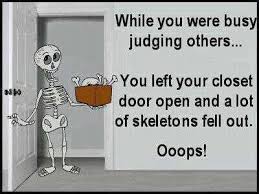 By nature I am a whinger and a whiner. It comes naturally to me. As I was growing up it was commonplace for me to comment on someone in the street, because they were too overweight, too noisy, too upset, too cranky, too… whatever… basically different to me. I recognize that it gave me a sense of my own “specialness.” I hope that this confession doesn’t shock you too much. I am not a special person. I am much like anyone else, full of faults. The only thing special about me is that I have been redeemed and called by the grace of God.

Even today, whenever I start to fall into a judgmental attitude in any way, it is my lovely wife, a true gift from God. who helps me to snap me out of it.

In the passage above and in the verses that follow, Jesus talks about whingers and whiners. These are people who are always judging others and condemn them in their hearts. They judge others for not being happy enough, and they condemn others for not being serious enough. And so, Jesus says, they condemned John the Baptist for being too serious and for keeping to himself, and they condemned the Son of Man for being too happy and sociable. These judgmental people are like a ship without a rudder. They don’t know which was is left, right, down or up, while they try to impose their own ideas on everyone else. And at the same time, they reject Jesus Himself.

You see, you can judge yourself out of the kingdom. You start of by condemning others, and you end up in condemning Jesus himself!

And so, Jesus says to them in verses 20–24 , since you like judgment so much, I’m going to tell you a bit about it. What is the true basis of judgment?

The basis of true judgment is your attitude to the presence and work of Jesus Christ. And so, Jesus says, if the works that he had done in the towns of Galilee had been done in Sodom, Sodom would still be around today. In this one saying, Jesus puts the righteousness of the self-righteous Galilee below that of Sodom and Gomorra –bywords of immorality and sin.

And that’s a lesson for the self-appointed, self-righteous whingers and whiners of today.

As Jesus said, wisdom is proved right by her deeds. Consider Jesus; look at his deeds. And then be wise and judge rightly!