The Problem with Democracy 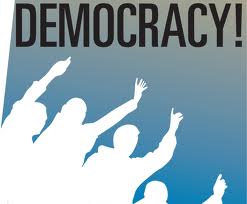 When God brought the children of Israel up to the border of the Promised Land, He told them to go in and take the land – it was theirs. But the people had a different idea. They decided to have a committee meeting.  You may have heard the saying that “Committees are the dark alleys into which ideas are lured and slowly strangled.” That’s what happened. God’s idea was slowly strangled.

Of course they chose the best people they could choose – the most qualified, the most educated, the most talented, etc. etc. In short, they chose people just like them, so that 10 of the spies were gutless spiritual wonders, deficient in what mattered most – faith in God, and the willingness to know that God says what He means, and means what He says. God had said, “go – it’s yours.” That’s all they should have needed.

When the spies came back, they all agreed on the challenges ahead, but ten of them scared the people witless with their report, and they concluded that God wasn’t telling the truth. Only two of them, Joshua and Caleb, were willing to stand for God. If God had said it, they knew that that was all they needed to know.

The people effectively put God’s word to a vote. And faith was outnumbered 10 to 2. Sadly, it almost always is. For Israel it meant 40 years in the wilderness. All because of unbelief… a lack of faith.

This is about spiritual matters. This is about how you are going to run your life. Don’t put God to a vote with your friends. Neither do votes in churches determine the truth. It can never be, because God will always be true even if all the world be false. People spend too many years in the wilderness because they try putting God to a vote.

The only vote that counts is the vote that God cast when He sent His Son Jesus Christ into the world so that you might believe in Him and have everlasting life. In Jesus, through Calvary, your salvation is done and dusted, if you accept Him by faith. To put that to a vote is downright insulting to the One who has loved you so much.