In the 1930’s, as part of a government study of the disease, 399 black Americans were infected with syphilis, treatment withheld. President Clinton met with survivors who had been victims of this atrocity. He said: “We can look you in the eyes and say on behalf of the American people: What the government did was wrong, and I am sorry.”  In the same year of Clinton’s apology, Tony Blair, British Prime Minister, apologised for his country’s role in the Irish Potato Famine, and the suffering inflicted by it. “That one million people died in what was part of the richest, most powerful nation in the world, is something which still causes pain,” he said.

Sometimes we are not pleased when our leaders take responsibility on our behalf for evil deeds done in the past. We are far more eager to issue public disclaimers than to be answerable for what happens, or has happened to other people. Perhaps we protest too loudly. Often, when we think we have nothing to lose and something to gain, we are aware of our deep connection to the rest of humankind.   I suspect that Pilate, acting out his washbasin melodrama, was not as convinced of his innocence as he hoped to appear. All of us have a part to play in producing the conditions in which others must live. We are locked into the consequences of our actions which impact on neighbours near and far

Land care practices of farmers in the Northern hemisphere ultimately affect people in the South.  Millions of tonnes of coal, gouged from the earth of the Australian land mass and sold to developing economies in Asia is destined to have an effect shared by the entire planet’s populace.  It is increasingly obvious in the ‘global village’ that we are all tied together in a dramatic relationship of mutual responsibility. This has always been so, but now it is powerfully documented by science. And the link of accountability is intergenerational. What our fathers did affects us; what we do now will affect our children. 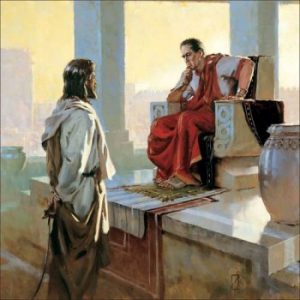 The good we do and the evil we perpetrate by our failure to do good occurs in a relationship of terrible solidarity.  We can never be entirely detached from another being’s plight. The chaos and grief of the world; the crises of politics, wars, genocides, miscarriages of justice; we each, even if inadvertently, contribute something to the way things are in the world.

In the gospel, God deals with the human family in its entirety.  In one racial stroke, at Calvary, he grants forgiveness, and another chance—not for us to wash our hands, but—to get them dirty. If we segregate ourselves from culpability  in the world drama, we deprive ourselves of the privilege of communicating the healing message of Jesus to those whose guilt and plight we truly share.