What the Cross Has Achieved – by Desmond Ford 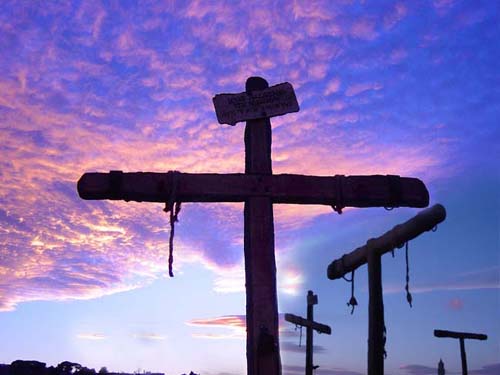 The death of Christ was not the arbitrary placing upon an innocent third party of the penalty belonging to another. No! It was the offended God himself personally accepting the guilt of sinners and paying their debt. “In Christ God was reconciling the world to himself” (2 Cor 5:19). Thus, and thus only, could he “be just, and the justifier” (Rom 3:26 KJV).

He honours the law by exacting the penalty; He transforms the sinner by the melting display of his love. Thus, the lost may be saved and yet the “ninety and nine just persons” of the sinless universe not be endangered.

As we behold the cross, the primary glimpse of a dying man is replaced by our perception of a suffering God. Love and hatred, good and evil, are revealed by contrast as the Creator endures what the creature deserves. As we continue to gaze, it becomes apparent that we are all there on that cross! We died at three o’clock, black Friday, in the first half of the first century AD (the exact date of Calvary is unknown).

In Christ all persons legally died and paid the price for their sins. Therefore, “whosoever will, may come,” and “all manner of sin and blasphemy shall be forgiven unto men.” God “is faithful and just to forgive us our sins” because the claims of the righteous, eternal law have been met, and we have died in our Substitute and Representative. God will not ask us to pay the price a second time if we abide in Christ.

“Ye are complete in him,” “accepted in the beloved.” “There is therefore now no condemnation to them which are in Christ Jesus.” Christ was made what he was not, that we might be made what we are not.