Wheels Within Wheels – by Eliezer Gonzalez 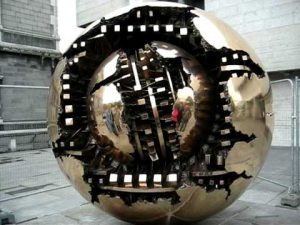 Have you ever wondered why life hardly ever works out the way you expect? Why the best-laid plans too often fail? Why the law of cause and effect doesn’t seem to apply in any sort of way that makes sense?

Ezekiel was probably wondered about this as well as he considered his devastated nation and religion. There he was, bewildered, a slave in Babylon, praying by the River Kebar, when God sent him an awesome vision (Ez. 1:1–27).

Ezekiel saw, in the heavens, four living creatures that seemed like they were literally out of this world, and beside each living creature was a wheel that seemed to have other wheels within it, so that the each wheel could go in any direction. High and lifted above, way above the living creatures was a majestic and beautiful throne, and on it was someone who looked like a man. This being, surrounded by fire and light like a rainbow. And these wheels within wheels moved over all the earth.

Ezekiel knew that he had seen the glory of the Lord God (Ez. 1:28), but I am not sure he understood the meaning of what he had seen. The fact is that like most of the Old Testament, this vision is impossible to understand without the light that the New Testament shines upon it.

In Revelation 4, the prophet John saw a similar scene (Rev 2:4–6). He saw four living creatures, and they were around a throne. On the throne was someone who shone with the light of precious stones. From the throne, which was surrounded by a rainbow, came flashes of lightning. The mystery continues. Who is it who sits upon the throne?

The wheels within wheels? They tell you that the enthroned Lamb of Calvary is everywhere, knows everything. No sparrow falls without his knowledge. Nothing can happen without his permission.

Although your life might seem to be in chaos, remember that the victory has been won at the Cross. Remember that although not all that happens right now may be good, there is One who is working all things out for your good. They were set in motion when Christ cried out, “It is finished!” at the Cross, and now the end-game has begun. There are wheels within wheels that we have neither the wisdom nor intelligence to understand.

It is enough to know who is in control: One who understands, One who cares, One who has given his life to make sure that you can have yours.