Where are the Nine? 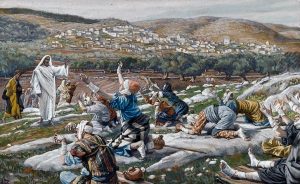 An intriguing thing happened to Jesus. He was travelling along the border between Samaria and Galilee. (Luke 17:11–19). By the way, pay attention to that. Because wonderful things happen on the borders of our religious existence! Ten lepers met him and cried out to him, “Jesus, Lord, have mercy on us!”

Jesus healed them ­– he healed the whole lot of them. He did it in an odd way. He sent them to show themselves to the priests, which was what people who had been healed had to do, and the gospel tells us that it was as they went that they were healed. In other words he told them to act like people who had been healed, or we might say, to act in faith, and it was as they obeyed in faith that they were healed. That’s interesting. But what happened next is even more interesting.

One of them came back to thank Jesus; the other nine didn’t. And the one who came back was – wait for it – a Samaritan.

We usually use this story to illustrate gratitude, and rightly so. But here is what intrigues me…

“Weren’t ten cleansed? Where are the other nine? No one returned to praise God except this foreigner?” Then Jesus said to him, “Get up and go. Your faith has healed you.” (Luke 17:17–19, CEB).

Now, here is the point: we should never forget that all ten had had enough faith to believe, and all ten had been cleansed. Perhaps the other nine were even grateful, in their own way. How could you not be?

But there was only one who truly understood, whose heart was truly touched, who truly appreciated what Jesus had done, and whose life was radically changed for the better in a deeper, more powerful way. The words of Christ to him seem to indicate that somehow, his healing was more complete than that of the other nine. Because he came back, because he threw himself at Jesus’ feet, and fully acknowledged him as Lord.

Perhaps the lesson here is not so much about gratitude, but an even more important lesson is that the grace of Jesus Christ is greater than we have ever imagined.

Perhaps the lesson here is that there are many who have enjoyed the blessings of the gospel in this world, but few who really start to understand and appreciate what their salvation means, and what it cost, and just how much it is all of Christ and not of themselves.

Sadly, Christians all too often take the gospel for granted. The “Samaritans” don’t. And perhaps… just perhaps… the “Samaritans” actually often “get it” a whole lot more than those who define themselves as the people of God.

Perhaps there will be many more “Samaritans” in the kingdom of heaven than we ever expected. Perhaps some of the nine will never come back, although they may be happily thinking that they are worshipping God in their churches.

It’s time for a reality check. Have you understood the gospel? Really?