You Were Saved Too! – An Encounter on the Kenya-Uganda Border

Pr David Kayumba is travelling through various countries in Africa, running gospel meetings and distributing the book, “Jesus Only” by Des Ford. The Lord Jesus is blessing his trip in many wonderful ways.

This morning he shared with me the following story that just happened to him on the Kenya-Uganda border. It would have happened within the last few days. He tells the story in his own words… 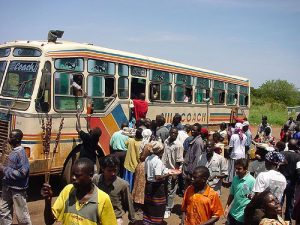 As we stood patiently in the queue waiting to be attended to by the immigration officer, an impatient bus drive came along try to get his passengers to jump the queue but with no successs. He stood back and angrily began to mock some people who wore religious robes. These passengers clad in the religious robes were heading to Uganda to celebrate the Ugandan Martyrs’ Day.

He mockingly refered to them as ‘the saved’, a term always used here to refer to born-again Pentecostals. These people kept silent as the impatient driver mocked them. So I entered a conversation with the driver. I said to him that, ‘Brother, you too are saved’, and this was a surprise to him. I continued by saying to him, “You were saved 2000 years ago, you simply do not know that fact, and this is the time for you to know.’ This brother was sent into such a joyful silence that he stood on attention to listen to me. His standing at attention in silence could not go unnoticed by both the Immigration Officer and those in the queue.

As I finished announcing the gospel to this man, he shouted saying, ‘Me too! I am saved!’ Now I know!’ I reached into my bag and handed him JESUS ONLY. He asked me how much was the book? I told him that it was is a free gift to him, just as salvation was a free gift. He made everyone happy when in thanks-giving he said to his passengers, ‘Take your time – as much as you want. You will find me busy reading my book.’

I am thankful to God for this encounter. I hope to see this man in the kingdom and in the earth made new.