Young and Old Join the Kingdom of Heaven in Ukraine! 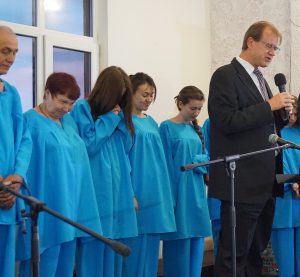 Dr Philip Rodionoff prays over those who have chosen to be baptised.

In mid-April, sixteen people joined the Kingdom of Heaven through baptism in Kherson, Ukraine, as the fruit of the work of the Holy Spirit through an evangelistic programme presented jointly by Drs Philip Rodionoff and Eliezer Gonzalez, who are both Directors of Good News Unlimited.

The two-week programme focused on a clear presentation of the Gospel, supported by compelling evidence for the reliability of the Bible, our origins, and for the historicity of Jesus Christ.

Kherson is a once-prosperous city in southern Ukraine that has fallen hard times since the collapse of the Soviet Union, compounded by Ukraine’s current economic problems. In spite of the great needs of its people, the city of Kherson has traditionally been a difficult city to reach for the Gospel. 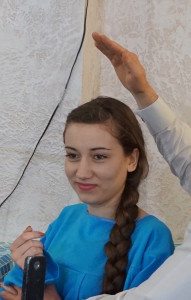 Ana, whose story can be read here, confirms her faith decision through baptism.

It was wonderful to see people from such a broad spectrum of society – from younger university professors to retired, unskilled people, from older people to young people, from young mothers to grandmothers – all witnessing.

This programme was privately sponsored by people who want to see as many Ukrainians in heaven as possible, together with a smaller contribution from GNU. In fact, the success of these programmes in Ukraine is encouraging GNU to invest more of the Master’s Gospel talents in Ukraine!

Your new brother and sisters in the Lord thanked all of you who made this programme possible through your sacrificial giving, prayers and encouragement. And they will have an eternity in heaven, when all is revealed, to thank you personally.